Rhode Island is rich in historic sites.  Indeed, the state boasts more sites per square mile on the National Register of Historic Places than any other state in the country.  And, a new property has been added, pushing Rhode Island’s contribution to the list to nearly 19,000. 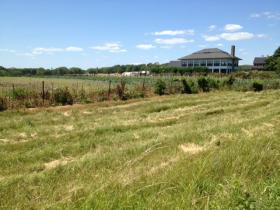 These are the residents of Rhode Island’s latest contribution to the National Register of Historic Places: cattle that call Sunset Farm in Narragansett home.  The farm made the list for several reasons.  For starters, it’s been in continuous agricultural production for nearly four centuries. And it has a very interesting building on the property – an East Indian style club house designed for tobacco magnate Francis Kinney in the early 20th century.   Sarah Zurier of the state’s Historical Preservation and Heritage Commission said old newspaper reports indicate golf was played on the property but they’ve never been able to find evidence to support it.

"So he erects this remarkable bungalow building and that becomes his private clubhouse. That’s where he invites people who’ve gone to polo matches nearby to have a drink and dine and look over the fields, look towards the water," said Zurier.

Sunset Farm is owned by the town of Narragansett. It’s operated as a working farm, which sells fruits and vegetables from a roadside stand. The clubhouse is rented out for parties.